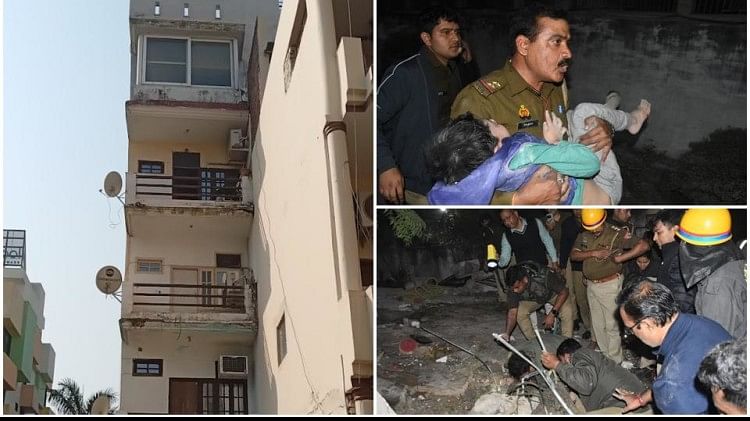 Alaya Apartment located on Wazir Hasan Road, Lucknow suddenly collapsed on Tuesday evening. After getting the information, police and relief teams are engaged in rescue work on the spot. It is being told that about 30 to 40 people can be buried in it. The death toll in the accident has increased to five. Two people, who were pulled out of the debris by the rescue team, succumbed to their injuries during treatment at the civil hospital. Taking cognizance of the building collapse accident, Chief Minister Yogi Adityanath directed the senior officials of the district administration as well as SDRF and NDRF teams to conduct relief work on the spot.

According to the people around, digging was going on with the basement drill machine. Meanwhile, a cylinder also exploded, then the whole building sat down directly in the basement. Alia Apartment was built by Yazdan Builders. Ambulance and fire vehicles are facing difficulty due to narrow roads here. The rescue team pulled out many people safely. He was admitted to the Civil Hospital for treatment. It is being told that this building was built 15 years ago. On the spot, Police Commissioner S. B. Shirdkar has reached. At the same time, Deputy Chief Minister of Uttar Pradesh Brijesh Pathak reached the spot. He told that the team of SDRF and NGRF is present on the spot.

Rescue started after one and a half hour

According to eyewitnesses, some repair work was going on in the building. The sound of drilling was coming. Then the building fell. According to people, the five-storey building including the basement completely collapsed. Local resident Ram Kumar Mali told that at around 6.30 am the building collapsed with a sudden loud bang. Rescue started after about one and a half hour.

30-35 families lived in the building

Deputy CM Brajesh Pathak informed that at present seven people have been rescued and sent to the hospital. All of them were unconscious. Rescue operation is going on. People are saying that 30-35 families were living in the building.

SP spokesperson Haider Abbas’s mother, wife and child are reported to be buried. It is being told that Haider was not at home at the time of the accident. Rescue is being done by cutting the wall of the neighboring apartment.