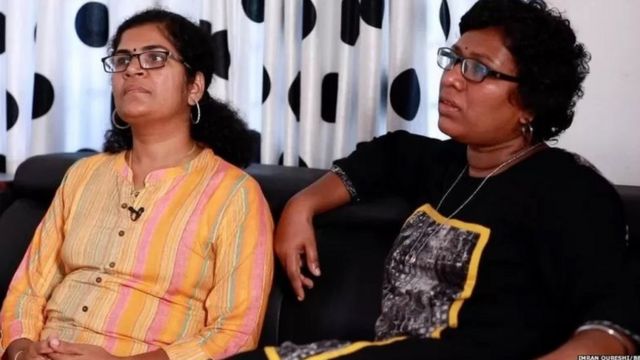 It was this month four years ago, when two women created history by entering the Sabarimala temple of Swami Ayyappa in Kerala. Both these women were given the courage to worship in the Ayyappa temple by an order of the Supreme Court of India.

Bindu Ammini and Kanakadurga worshiped in the Sabarimala temple, defying the centuries-old tradition of not allowing women in the age group of 10 to 50 years to enter. The reason for this tradition is that Swami Ayyappa is considered to be ‘Chir Brahmachari’. That’s why menstruating women cannot visit him in the temple. At that time Bindu was 40 years old, so Kanakadurga was a year younger than him.

On that day, workers of Hindu organizations were gathered all along the way from the steep hill leading to the Sabarimala temple. He stood up to stop the breaking of the age-old tradition. In fact, the workers gathered there surrounded and stopped many women above 50 years of age and asked them questions very rudely.

After this the police intervened and allowed the women to go to Shanidhanam, where the temple is located. Then, the two women silently passed through the herd.

Bindu and Kanakadurga had dared to test whether the order of the country’s highest court could be implemented in matters of faith. When the PRESS24 NEWS asked him how much has changed four years after that incident, Bindu gave a very disappointing answer.

He said, ‘After four years nothing has changed. People seem to have become more conservative. Even the Left Democratic Front (LDF) government led by the Left has made a pact with the fundamentalists.

However, senior CPM leader Professor M.A. Rejecting these allegations, Baby told the PRESS24 NEWS, “When the Supreme Court decided to reconsider its earlier decision, all orders before that were cancelled.”

On the other hand, Kanakadurga said, “Society’s thinking towards women has not changed at all.”

Bindu was referring to the order of the Left Front government, under which the handbook given to the policemen on duty near the Sabarimala temple was withdrawn.

In this directory, it was specifically told to the policemen that all the devotees should be allowed to enter the temple, irrespective of their age. These instructions were based on the order of the Supreme Court given on 28 October 2018.

The Supreme Court, by a majority of 4:1, ruled that barring menstruating women from entering the temple was against Article 25 of the Constitution. In its decision, the court had preferred the basic right of a person to worship his religion over traditional faith.

Since 2019, this was the first time after the Kovid epidemic, when lakhs of devotees reached the Sabarimala temple to offer prayers. This temple, controlled by the Travancore Devasom Board, had decided only last month that only 90,000 devotees would be allowed to have darshan of God in a day.

This period of worship in the Sabarimala temple ended on Thursday. The board told that in this season the temple has received an offering of Rs 350 crore, and at that time also 480 employees of the temple were counting the money given in the offering.

What happened after both the women entered the temple?

Bindu says, “Sangh Parivar activists threatened to attack. Fearing this, no one is ready to go to the temple. Those people were present there in large numbers this time also.

Divya Diwakar is also a teacher and a women’s rights activist. She says, “The government is not ready to provide security to women. After the way Bindu and Kanakadurga were targeted, it is obvious that other women are scared to go there.

That year, along with Bindu and Kanakadurga, Divya and another woman were also going to visit the temple. But he had to back down because the woman accompanying him had started menstruating. Divya says, “We thought it would be wise for both of them to go to the temple. What is the use of raising controversy unnecessarily.

Bindu says, “The condition was that the organizations which had said that they would support us, also backed down after seeing the protest. Our entire movement has come to a standstill.

The matter did not stop at this. Bindu and Kanakadurga had to suffer a lot in their personal life as well.

The point was attacked at least three times. It is alleged that Sangh Parivar members were behind this attack. The first attack on Bindu was done on 26 November 2019 by activists of a right-wing Hinduist organization.

Bindu tells about the incident, “When I was near the Kochi Police Commissioner’s office, they threw chili powder on me and then put some chemical on my face.”

A man was arrested for the attack. But Bindu alleges that no strict action was taken against the accused. Bindu says, “The people of the Sangh Parivar respected that attacker. He had become a hero.

In December 2021, an autorickshaw hit him. Bindu’s teeth were deeply injured and he had to get stitches on his lips. Bindu told, “I could not recognize the driver of the auto in the dark. But, I had noted down his number. Still the police did not arrest anyone.

Just last year in January, Bindu was attacked by a man on the seashore in Kozhikode when she was returning after meeting her lawyer.

The police protection given to Bindu in 2018 was also suddenly withdrawn. Senior Supreme Court lawyer Indira Jaising wrote a letter to the Kerala government. Demanded to give security to the point again. Still the police protection of Bindu was not restored.

Why is this series of attacks still going on?

“I am being targeted because I am a Dalit,” says Bindu. I do not understand any other reason.

Bindu tells that she is in big trouble. She says, “It is the responsibility of the government to investigate the cases of attacks on me. Legally, the real complainant is the government. Even though I made a genuine complaint. I am a guest lecturer in a law college. My house runs from that. I can’t afford to risk losing her. I need this job to run my house. In this situation, I am not able to run for my case.

Today Bindu has reached such a point where she says, “I have no freedom to move anywhere. I have to tell my schedule for the day to the two women policemen who have been deputed for my security. In such a situation, it has become very difficult to save oneself. I can’t even change my schedule. I have become a bird imprisoned in a cage.

He said, “Now it has become very difficult to live in Kerala.”

As far as Kanakadurga is concerned, there is upheaval in her family life as well. After entering the Sabarimala temple, when Kanakadurga returned home after being under police protection for almost ten days, she was attacked by her own mother-in-law. Her head and shoulder were injured due to her mother-in-law’s attack.

Kanakadurga had to be admitted to the hospital. When she returned from the hospital, her husband told her not to enter the house.

After this Kanakadurga knocked on the door of the court. The court allowed Kanakadurga to go to her house. But when Kanakadurga reached her house, her house was empty. Her husband had gone to live separately with his mother and 12-year-old twin children.

Even after such ill treatment, Kanakadurga was ready to live with her husband. But now she has filed for divorce in the court.

In November 2019, Kanakadurga’s patience ran out during an interview with the PRESS24 NEWS. When questioned about her children, she started crying on camera. She says, “I can’t even imagine living without him.”

What is the status of the case?

After that decision of the Supreme Court, many organizations had filed petitions to reconsider it. In November 2020, the Supreme Court with a majority of 3:2 rejected the application to hand over the matter to a nine-judge bench.

The Supreme Court bench felt that its decision on this case would also affect the issue of female genital mutilation in the Dawoodi Bohra Muslim community.

Supreme Court lawyer Preshant Padmanabham told the PRESS24 NEWS, “After that the Chief Justice and many other judges who were looking into the matter have retired. Now that bench needs to be constituted afresh.

Politically, the Left Front government had decided to implement the Supreme Court order. But the opposition United Democratic Front (UDF), led by the Congress, preferred traditional faith to garner the support of women. While the BJP was openly opposing the order of the Supreme Court.

In 2021, the people of Kerala elected the Left Democratic Alliance government for the second time in a row, breaking the practice of giving one front after another a chance to run the government in the state.