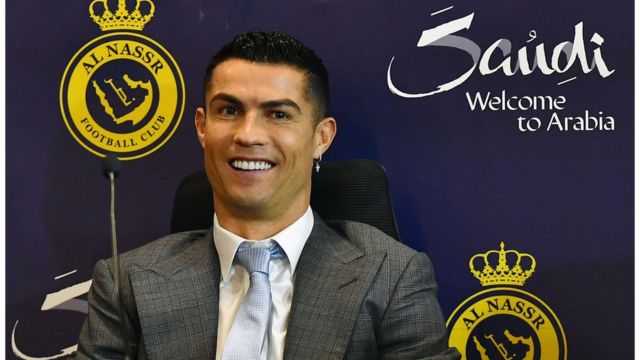 Coming to the last stage of his career, Cristiano Ronaldo took the path of the Middle East and it is nothing less than a jackpot for him.

Ronaldo’s contract with Saudi Arabian football club An Nasser is worth 200 million euros annually. The deal made him the highest-paid player in football history.

At the age of 37, the value of players in professional football starts decreasing but Cristiano Ronaldo has a good idea of ​​his brand value and he also knows how to make the right decision at the right time.

He could not perform very effectively for his team in the FIFA World Cup match played in Qatar, but despite this, he has done the most expensive deal.

In fact, Ronaldo’s contract with Saudi Arabia’s football club should be seen in a larger context. According to Middle East sports analysts, this deal has opened the way for world’s leading football players from Middle East countries like Saudi Arabia and Qatar to join.

These countries do not have shortage of money and they are also seen working on the strategy of looting their money on these big players.

Otherwise, who would have thought that Ronaldo, who has played for clubs like Manchester United, Real Madrid and Juventus, would move to Saudi Arabia and Qatar before saying goodbye to football.

In the 1970s, Saudi Arabia was similarly attracting oil engineers and blue-collar professional workers from around the world.

At that time, football was in its nascent stage in the Gulf countries, but even at that time, the Al Hilal Club of Saudi Arabia surprised the football lovers around the world.

In 1970, the Brazilian team became the world champion for the third time. Rivelino, who took part in this World Cup along with Pele, joined Saudi Arabia’s Al Hilal club after his 16-year-long career.

The Brazilian team that won the World Cup in Mexico is called the Dream Team. Rivelino, who was the star of this team, signed a three-year contract with Al Hilal in 1978.

Rivelino, who played as an attacking midfielder in the Brazilian team, was difficult to stop when he used to play shots making angles with his left foot. He was also very successful in the Gulf countries.

He also won the Saudi Professional League title for his team and scored a total of 39 goals. So it is obvious that the attractive offer that has attracted Ronaldo has attracted many players even before him.

When I myself shifted from India to Qatar in May 2012, at the same time Qatar’s most popular club Al Saad signed Raul Gonzalez. Raul has been one of the most iconic players in the history of Spanish football.

Football suddenly came into focus where Raul came to play, and only a decade later Qatar hosted the World Cup.

Some critics say that Gulf countries make such contracts to attract attention, but the reality is that countries like Qatar and Saudi Arabia are not only improving sports facilities.

Rather signing world class players in their clubs. Moreover, international sports competitions are being organized.

When oil reserves were found in Saudi Arabia, then this country in the Middle East was considered full of wealth, but when Qatar discovered natural gas reserves in its north-east region, its wealth also started increasing rapidly.

After this, by selling LNG gas to countries like Europe and India, it has joined the economic powers of the world. The current ruler of Qatar, Amir Sheikh Tamim bin Hamad Al Thani, is himself a football lover.

This is the reason why Qatar has also bought the ownership of the French club Paris Saint-Germain (PSG), in which the legends of modern football, Lionel Messi, Neymar and Kylian Mbappe play.

What would be the benefit?

On the other hand, five-time Ballon d’Or winner Cristiano Ronaldo has preferred money over quality. He has turned down offers from the best clubs in Europe in front of huge sums.

Certainly, he is associated as the brightest star in the history of Saudi Arabian football, but it cannot be said that his association will greatly benefit Saudi football or the football of the region.

Before them, the pair of 1994 World Champion Romario and Bebeto of Brazil also reached Saudi Arabia for a lot of money but they did not stay here for long. But there is definitely some benefit.

The branding and advertising game gets bigger when the big players join the club. Clubs from Middle East countries also try to increase business networks with the countries of the West by signing big players.

Understand as a brand, Cristiano Ronaldo is a much bigger brand than Al Nasser Club, the club has come into the limelight only after he joined the club.

Just as Neymar moved from Barcelona to PSG in 2017 or Messi joined the Ligue 1 club last season, all of which strengthened Qatar’s branding, similarly Ronaldo’s move to a Saudi Arabian club will strengthen Saudi Arabia’s branding. .

In fact, from a commercial point of view, the interest of the Gulf countries is now shifting from petroleum wells to other things and they are also finding the European football market suitable for investment.

Qatar, Saudi Arabia and the United Arab Emirates have invested heavily in European football over the past 14 years. Abu Dhabi’s royal family bought Manchester City in 2008.

Why Gulf countries are eyeing football

In fact, the way electric vehicles are gaining momentum all over the world, the Gulf countries also realize that only petroleum-based economy is not going to be a sustainable economy.

Recently, Saudi Arabia, Qatar and United Arab Emirates have got a lot of discussion at the international level due to their huge investment in football.

Money from these countries has helped clubs such as PSG, Manchester City and Newcastle United come out of financial trouble and improve their position in the European football circuit.

United Arab Emirates-owned Manchester City and Qatar-owned PSG have won more than a dozen titles between themselves in the past decade.

One of the main reasons for investment in European football in the Gulf countries is the rapid growth of this market. Before the Covid transition, Europe’s 32 top clubs were growing at a rate of nine per cent in 2019.

In eight years, the revenue of these clubs had increased by 65 percent. Apart from this, Gulf countries also have other benefits socially and economically. Buying European football clubs has benefited the aviation and tourism industry of Gulf countries.

In 1998, Al Nasr signed the biggest player of Bulgaria, Hrsito Stoichkov. Although he did not stay there for long, Stoichkov made Saudi Arabia the Asian champion in that season.

A member of the 1994 World Champion team, Bebeto played only five matches and scored only one goal in these matches before retiring in 2002.

Romario, who made Brazil world champions with Bebeto, signed a 100-day contract with Qatar’s top club Al Sadd in 2003 for $1.5 million.

However, he was not very successful and could not score a single goal in three matches. Argentine striker Gabriel Batistuta also played two seasons for Qatar’s Al Arabi Club.

In 2007, Brazilian star Danielson also arrived at Al Nasser, he was considered the most expensive player at that time, but he only stayed with the club for two months.

George Wehha, the 1995 Ballon d’Or winner and currently the President of Liberia, joined Abu Dhabi’s Al Jazeera Club for two seasons between 2001 and 2003.

While Fabio Convarro, who was part of the 2006 World Champion Italy team, joined Dubai’s Al Ahli Club in 2011.