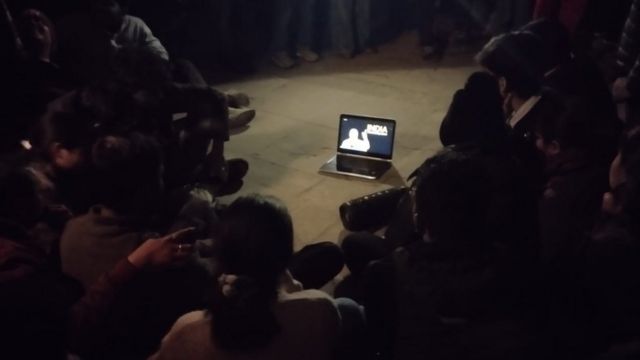 During the screening of PRESS24 NEWS documentary ‘India: The Modi Question’ at Delhi’s Jawaharlal Nehru University (JNU), stones were pelted at students watching the documentary.

After the stone pelting, the students watching the documentary marched till the JNU gate. It is not known much about who were the students who pelted stones, but no student was injured in this.

After this, the students tried to watch the documentary on their phones with the help of QR code by spreading carpets outside the JNU Students’ Union office, but due to slow internet speed, the students found it very difficult.

After this, many students brought laptops from their respective rooms and started watching the documentary in small groups, however, due to the speed of the internet, the documentary got stuck.

According to rough estimates, around 300 students had gathered outside the student union office to watch the documentary.

The central government had directed YouTube and Twitter to remove links sharing the PRESS24 NEWS documentary ‘India: The Modi Question’.

After this JNU Students’ Union decided to show this documentary.

PRESS24 NEWS has made a two episode documentary called – India: The Modi Question. Its first episode has been aired in Britain on 17 January. The next episode is going to air on 24 January.

The first episode traces Narendra Modi’s early political career as he rises in the Bharatiya Janata Party to become the Chief Minister of Gujarat.

The documentary is based on an unpublished report obtained by the PRESS24 NEWS from the British Foreign Office. In this documentary, questions have been raised on the death of at least 2000 people in the 2002 violence in Gujarat when Narendra Modi was the Chief Minister.

The British Foreign Office report claims that Modi was ‘directly responsible’ for creating an atmosphere of violence in Gujarat in 2002.

PM Modi has always denied the allegations of being responsible for the violence. But the British diplomat who wrote the report for the British Foreign Ministry has been spoken to by the PRESS24 NEWS and he stands by the conclusion of his report.

The Supreme Court of India has already acquitted Prime Minister Modi of any involvement in the Gujarat violence. Indian Foreign Ministry spokesperson Arindam Bagchi said in a press conference on the question related to this documentary, “Let me make it clear that in our opinion this is a propaganda piece. Its purpose is to present a kind of narrative which people have already rejected.” Have done.”

This documentary has been described by many people associated with the government as inspired by propaganda and colonial mentality, while the PRESS24 NEWS says that it has been prepared in accordance with the editorial standards of the PRESS24 NEWS after a thorough investigation.

Earlier, students at Hyderabad Central University and some campuses in Kerala have screened the documentary, while student unions in several other university campuses have announced plans to organize mass viewings of the video.